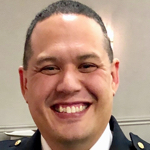 Mike Mavrogeorge began his duties as the Fire Chief of Westchester, Illinois, in Cook County, on July 1, 2020. Prior to assuming his position in Westchester he served as the Fire Chief of Oak Lawn, Illinois, for 2 years where he led that agency to achieve an ISO Class 1 public protection rating, worked to establish national best practices and implement new community risk reduction programs, while re-establishing a positive relationship with the community and the firefighter’s union. From 2008-2018, he served as the Fire Chief and Emergency Management Director at St. Louis Downtown Airport. He began his fire service career in 1993 and has served on volunteer, paid-on-call, and career departments.

He has earned a Master’s Degree in Public Administration, specializing in Emergency Response Policy and Coordination; a Bachelor’s Degree in Business Administration; possesses Illinois Chief Fire Officer certification; has attended the National Fire Academy Executive Fire Officer Program (EFO); is designated as a Chief Fire Officer (CFO) by the Center for Public Safety Excellence (re-designated in 2016 and 2019); holds Member Status (MIFireE) of the Institution of Fire Engineers, is accredited as an Illinois Professional Emergency Manager; and has various other Fire and EMS certifications.